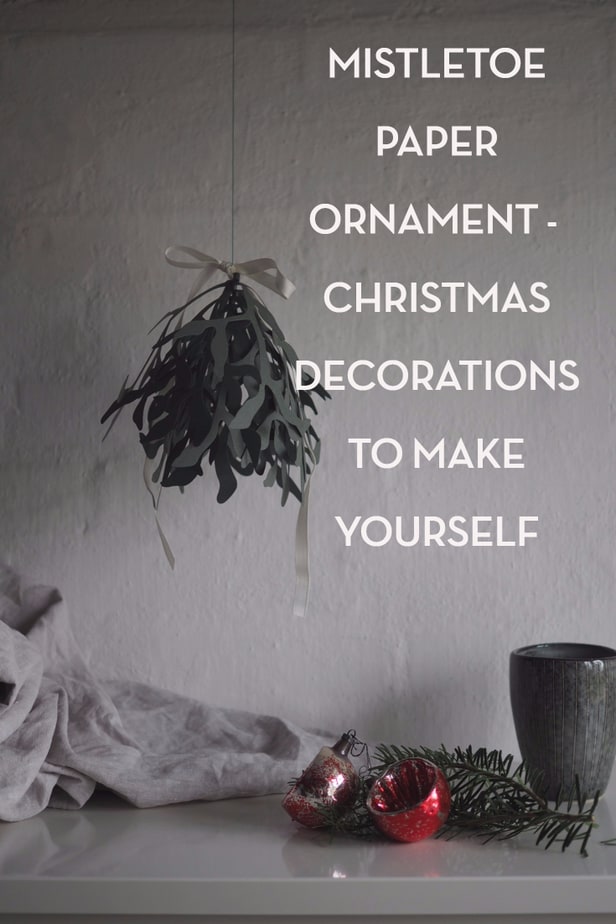 No wonder that it’s used as a holiday decoration despite if we believe in the old traditions or not.

The custom of using mistletoe to decorate houses at Christmas is a survival of the Druid and other pre-Christian traditions.

Thought that the The European mistletoe grows on a range of trees including willow, apple and oak trees it is not that easy to get a branch or two in December for decorating.

Also the mistletoe is considered poisonous.

Well the next best solution is to create your own mistletoe paper ornament that is also elegant and decorative and can be re-used for the seasons to come.

You can hang the  mistletoe as it is for your Christmas window decoration. 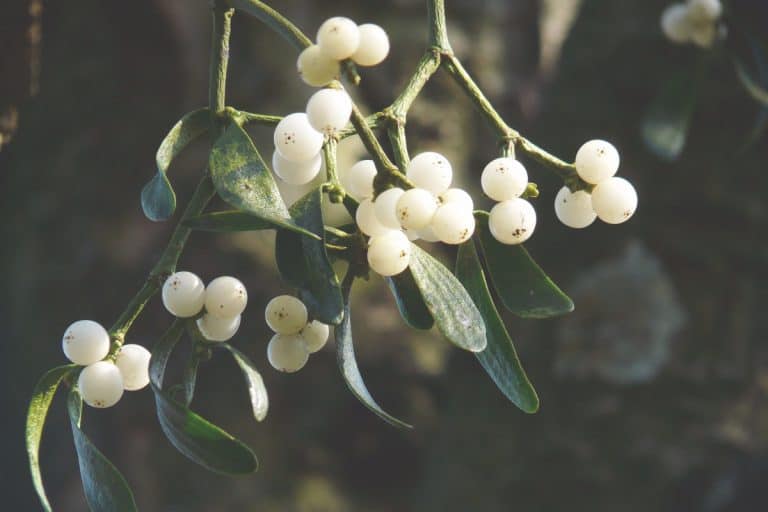 Did you know that you can translate Mistletoe as “poo on stick”?

Mistletoe is normally spread on trees through bird poo. 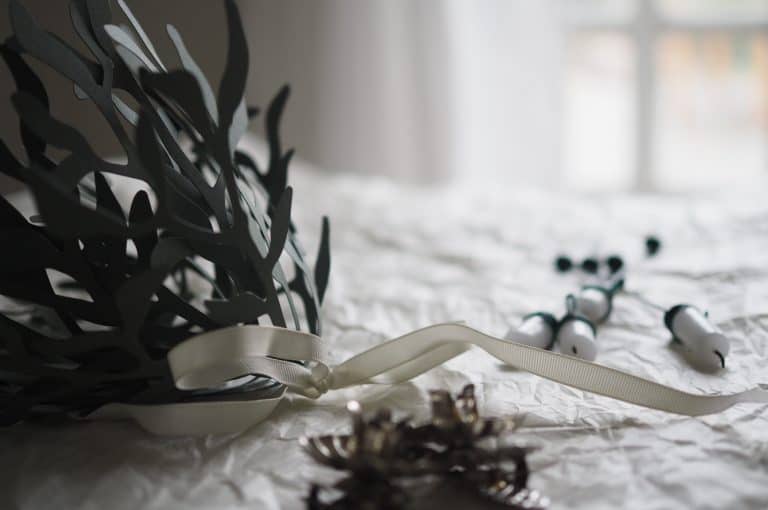 From the earliest times mistletoe has been one of the most magical, mysterious, and sacred plants of European folklore.

There are several myths and traditions around mistletoe that come from the ancient Druids and the Greek festival of Saturnalia, to the Norse mythology.

The Druids have considered mistletoe to bestow life and fertility; a protection against poison; and an aphrodisiac.

Kissing under the mistletoe is first found associated with the Greek festival of Saturnalia and later with primitive marriage rites. But others sources state that the custom of kissing under Mistletoe comes from England.

In Scandinavia, mistletoe was considered a plant of peace, under which enemies could declare a truce or warring spouses kiss and make-up.

Well, we like the meaning behind the Scandinavian mythology the most and here is a short version of the story: 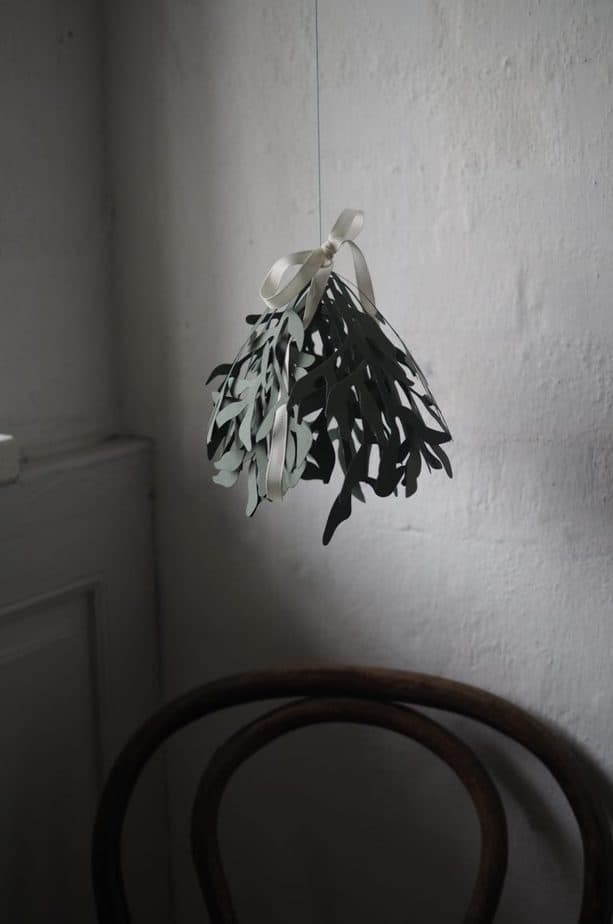 Balder, the god of the summer sun,  was a son of Frigga, goddess of love and  a grandson of the Norse god Thor.

Balder had a dream about his death, that each and every plant and animal on earth wanted to kill him.

As he was a god of the summer sun, if he should die, all life on earth would end.

In an attempt to keep this from happening, his mother Frigga went at once to air, fire, water, earth, and every animal and plant seeking a promise that no harm would come to her son.

But Balder had one enemy, Loki, god of evil and he knew of one plant that Frigga had overlooked in her quest to keep her son safe.

But during the celebration that now Balder could not be hurt by anything on earth or under the earth, he felt a pain in his chest.

He had been stabbed and killed by an arrow made from the wood of a mistletoe plant.

Loki made an arrow tip of the mistletoe, gave to the blind god of winter, Hoder, who shot it, striking Balder dead.

Mistletoe was the one species on earth his mother had failed to notice.

It grew neither on the earth nor under the earth, but on apple and oak trees. 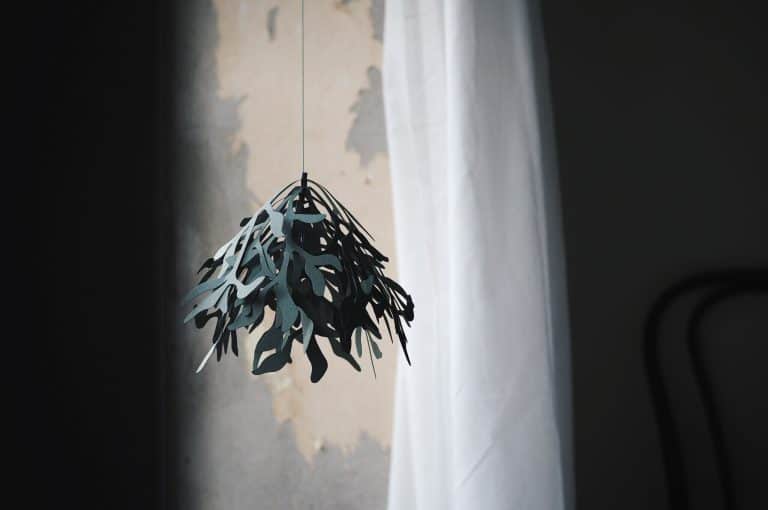 The sky paled and all things in earth and heaven wept for the sun god. For three days each element tried to bring Balder back to life.

He was finally restored by Frigga, the goddess and his mother. It is said the tears she shed for her son turned into the pearly white berries on the mistletoe plant and in her joy Frigga kissed everyone who passed beneath the tree on which it grew.

The story ends with a decree that who should ever stand under the humble mistletoe, no harm should befall them, only a kiss, a token of love.

This Mistletoe paper ornament is a perfect option for your minimalist Christmas decor.

So easy to make in less than 5 minutes: DIY kits contain all ready-to-use elements that you will need.

Fold it back into the packaging folder when the season is over.

And look forward to use this decoration again and again. 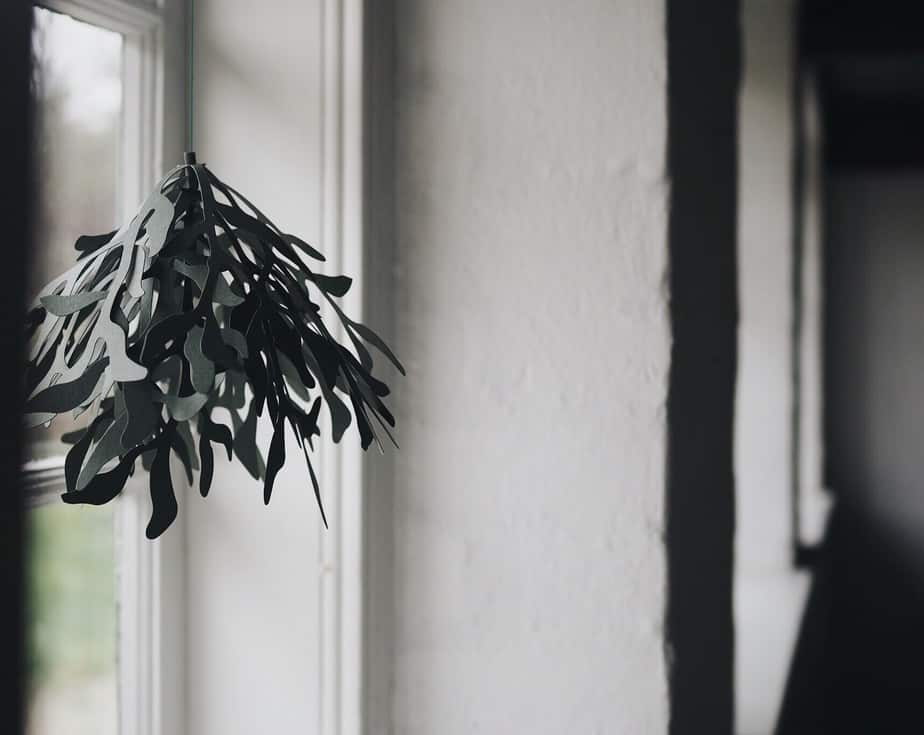 You can hang the  mistletoe as it is for your Christmas window decoration. 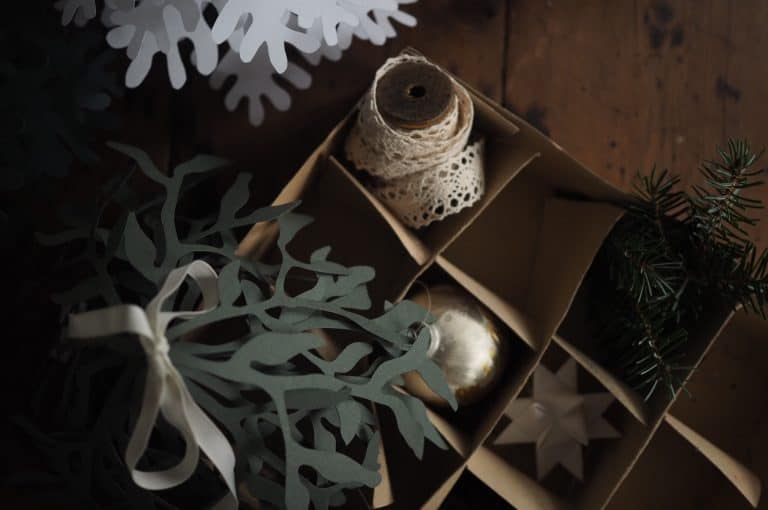 Paper arks with ready-to-use elements made of 175 g sturdy paper with natural antique finish.
FSC and ECF certified (no heavy metals or chlorine bleaching)
You can easily use your decorations for many seasons to come. 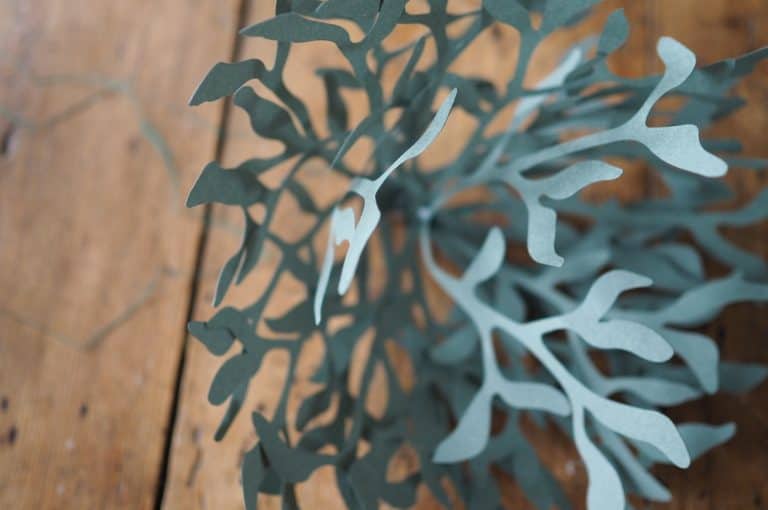 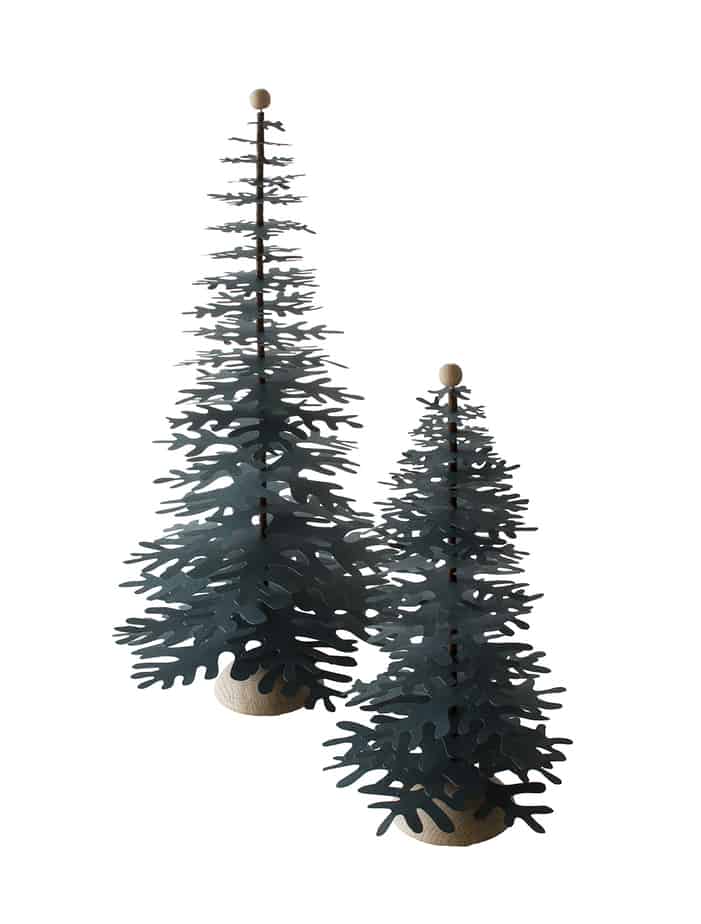 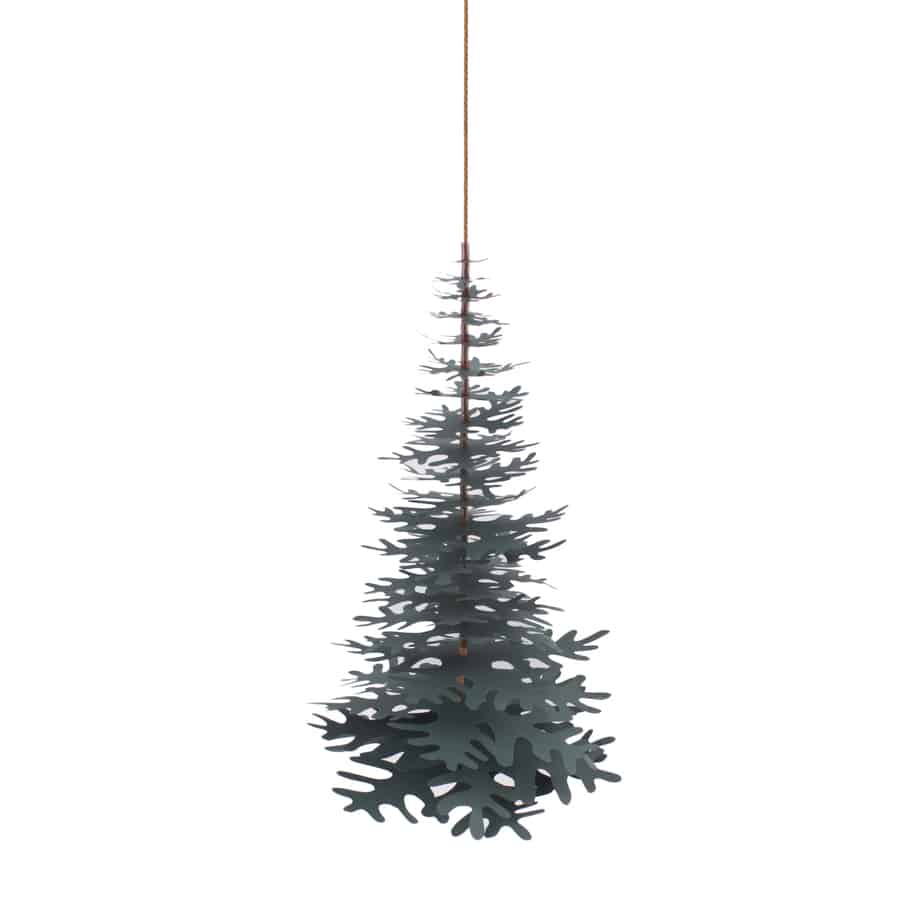 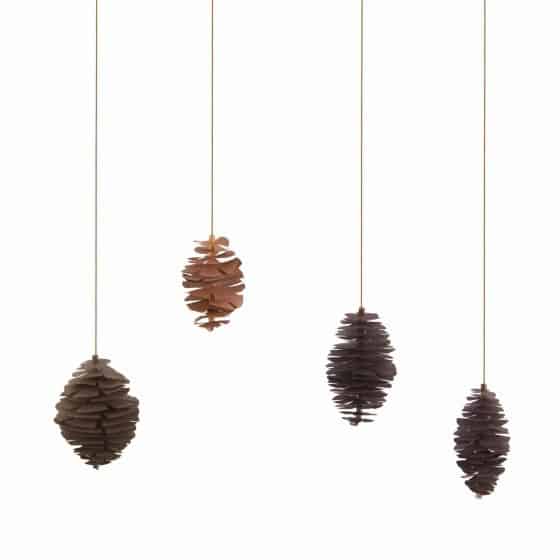 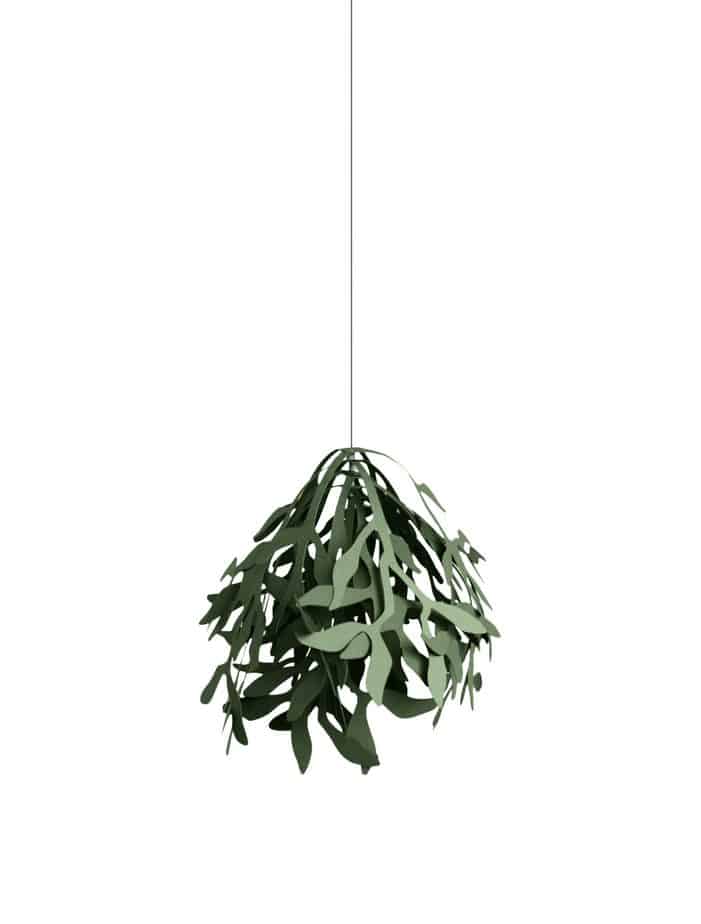 And if you want more inspiration for Scandinavian style Christmas decoration, take a look at our blog post about Advent traditions: